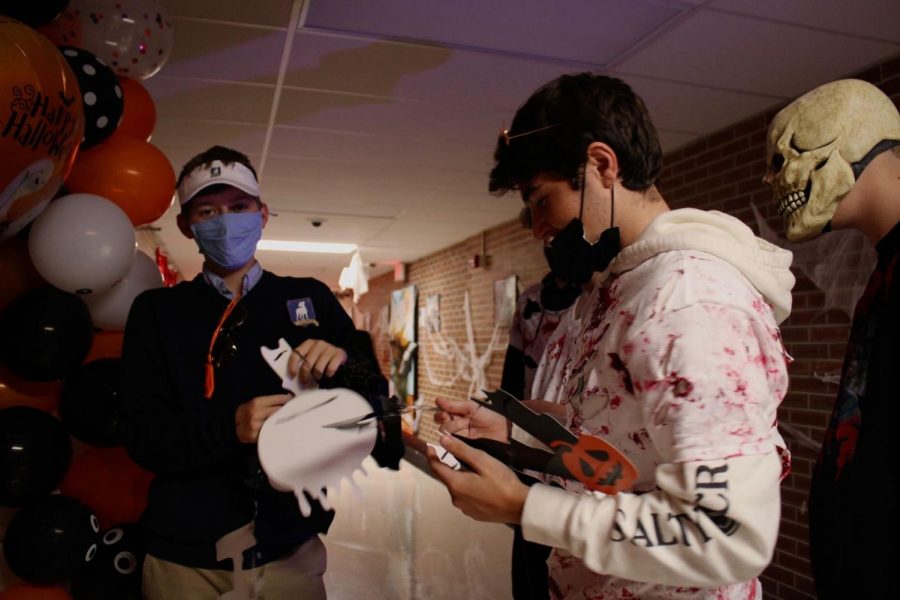 On October 29, 2021, Hopewell Valley Central High School and its choir and technical theater departments put on “Hopewell’s Haunted Hallways.” The event was a spooky haunted house that turned all proceeds over to CHS Choirs and was a huge success.

Mr. White, HVCHS choir director, was at the head of this ambitious project. He has wanted to do a Halloween event for quite some time now, saying that his “excitement was pretty high,” and that, “[He’s] kind of a silly person at heart, so scaring people seemed like it would be fun,” in an interview before the night of the haunt. Mr. White ensured that every role was filled, from hallway guide to radioactive skeleton, having all of his choir classes pitch in and putting a reported five to six hours of his own time into the project every day.

Mr. White also reached out to Mr. Kelly, our Technical Theater teacher and Performing Arts Center (PAC) Manager to gain further assistance for the project and recruit students from Technical Theater classes. Mr. Kelly also expressed his excitement, stating, “After not having a major live indoor event in over a year and a half, bringing everyone together can give us all a sense of normalcy, even if only for a short amount of time.”

The Friday of the event, as the last dismissal bell rang, over 65 students got to work decorating the PAC, the Band and Choir Rooms, the 100 Hallway, and the Main Hallway, creating an elaborate route from our school’s Main Entrance to the Robotics Room exit. Cobwebs, gravestones, gigantic inflatable spiders, crystal balls, bloody handprints, and a twelve-foot-tall clown-head entrance were put on display quickly, as the first guests would arrive at 5:30 pm for the family-friendly portion of the haunt.

A handful of volunteers were designated scare actors, and makeup was crucial for making high school students creepy enough to scare even the bravest adults during the later hours of the night. Student makeup artists designed apocalyptic zombies, pale skeletons, horrifying princess clowns, and special effects scars and wounds, working with the slight limitation masks may have presented.

After all children and families had passed through and gotten far, far away from the school, fake blood, weapons, and audio tracks of screams and other scary sounds were added to the environment. Jack Creegan, a PAC Student Assistant, was in charge of all things lighting and sound for the haunt.

Alongside the efforts of scare actors, Creegan organized bone-chilling screams, strobe lights, rumbles of thunder, and a large projection of the moon to create an elaborate scene of murders, walking dead, and possessed souls inside of the PAC. Many students who walked through regarded this as one of the scariest parts of their experience.

Scenes of monster-hybrids, gory victims, interactive ghost stories, and scariest of all, Mr. White himself, chasing victims with a chainsaw, created a unique adventure throughout the rest of the haunt.

The reception of the event was even better than many anticipated, with a line spanning from the Main Entrance to the PAC parking lot. Groups of students went through multiple times, enjoying the ever-amusing laughter and screams the haunt invoked.

Hopewell’s Haunted Hallways was a concept that’s never been done before, and according to the supervising faculty, it was only successful because it became a passion project for the students involved.

“I vividly remember two of my students immediately ‘going down the rabbit-hole’ within about ten minutes of proposing the idea. That would then carry into so many other students being involved.” Mr. Kelly commented,

Mr. White, Mr. Kelly, and everyone else involved, hope to do another haunted house next Halloween, or perhaps other unconventional fundraisers later this school year; the hope being that anyone who missed this spectacle will still be able to witness choir and technical theater students’ incredible performances in the future.