Much Ado About Nothing at Hopewell 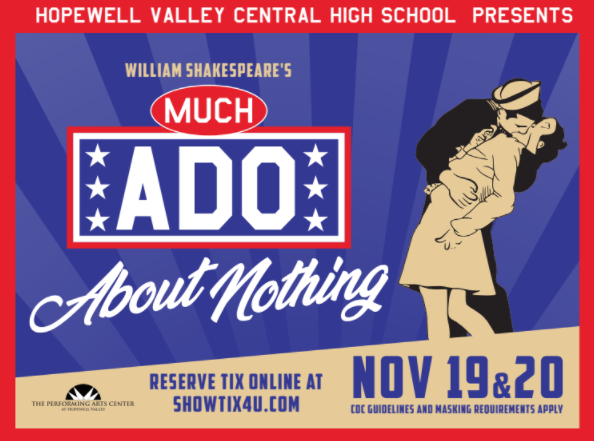 After two years without in-person performances, the theater department is bringing us this year’s play, “Much Ado About Nothing.” Along with remarkable scenery, the play contains a very strong female character and has a great portrayal of feminism, which the high school audience can enjoy.

This Shakespearean comedy is being by Ms. Rochon, our Performing Arts teacher, and the leaders of the play.

The scenery is changing to be set in Little Italy in New York City after World War II. Rochon wanted to do something similar to one of our school plays “Midsommar.” She decided to shift the setting since she and Andy Parsons, the director of scene design, wanted to have fresher air for the comedy. Both she and Parsons wanted something different and challenging for the comeback of in-person acting.

In addition, Mr. Kelly, the technical director of the project, explains to us that this play is an “open-source material,” allowing the directors to experiment with new directions. “Since there isn’t a template to work from,” Rochon says, “this play may be one of the most creative plays the school’s ever done.”

Of course, hard work is being put in to underpin these innovative ideas, and a variety of technical aspects will be used to achieve them.

One of the other remarkable things about this show is that it’s mostly student-driven. Jack Creegan is the Student Technical Director and is being helped by the Assistant Managers, which are Hannah Baron, Sara Petrillo, and Carina Estrada.

Ms. Rochon, Mr. Kelly, and all of the cast and crew await you on November 19th and 20th to watch this play. We hope to see you all there!