The Tattooist of Auschwitz – Book Review 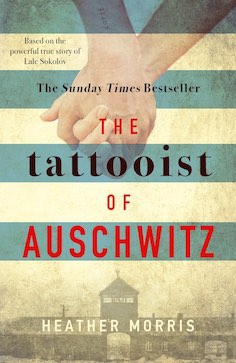 The Tattooist of Auschwitz, by Heather Morris, is a beautifully tragic novel based on a true story. Lale Sokolov was a Slovakian Jew who spent more than two and a half years in concentration camps. Through all that darkness, Lale found a glimpse of light in a woman named Gita, who he immediately feels a strong attraction towards. This is a book full of ups and downs that will leave you on the edge of your seat, page after page.

The book begins by throwing the reader into the mind of Lale, a man standing in a crowded train with no idea where it’s taking him. The reader unfortunately knows exactly where this train will stop: Auschwitz-Birkenau. Upon his arrival, Lale knows he can get a leg up because he knows six languages, making him an asset in the offices of the camp and providing him with privileges, albeit slim ones. He takes the job of Tätowierer (tattooer), who permanently marks the crowds of people who are forcibly pushed into the camp by Nazis.

One day, he marks a woman who he can’t get out of his mind. Her name: Gita. Just Gita. After befriending and quickly falling in love with her, he discovers that she has a hundredth of the hope for the future that he does. She even goes so far as to refuse to give him her last name or tell him anything of her past until the day they walk out of the camp. Lale, on the other hand, is positive he’ll see his family again, positive he’ll make it out, and positive he will marry Gita.

Even as a prisoner of Auschwitz, Lale still tries to help others. In the camp, there was a block called Canada, where all of the confiscated goods from prisoners were stored. Lale would get goods, such as jewelry, from Canada and use them to buy food and medicine from a friendly worker of the camp. He tried his best to help out everybody around him.

Of course, that isn’t to say that Lale didn’t have his dark days. Lale lived in a block full of Romani people. They became friends as close as family after so long living beside each other. One day, he wakes up to see his entire camp being marched out, and when he sees the smoke pouring out of one of the gas chambers, he knows exactly what had happened. Another time, his food smuggling operation was discovered by the Nazis, and he was badly tortured. Even still, he would not give up the name of the worker that helped him, nor those of the people he had helped.

To fully appreciate this novel, it’s important to acknowledge the true story it was based on. Ludwig (Lale) Sokolov survived Auschwitz, as did Gita. He later got arrested for smuggling money out of Slovakia to help establish Israel. Lale, being as clever as he was, pretended to go insane from being confined to a jail cell so that they would release him for a few days to collect himself. He and Gita immediately fled Slovakia for Australia, where they would have a son, Gary Sokolov, who continues to tell the story of his parents. Lale died in 2006 after a miraculous life, told wonderfully in this novel. This is a necessary book, a story of tragedy and hope, and above all else, it’s a tale of finding love in the most challenging of places.