The Six Letter Word That Has Taken The World By Storm 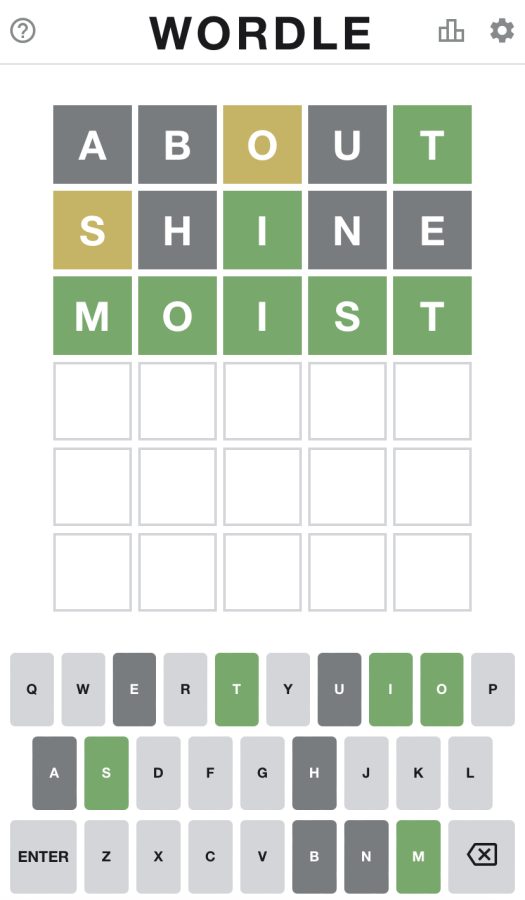 One word, five letters, two vowels, three consonants, what could it possibly be? One possibility has risen above all the rest: Wordle. According to the New York Times, Wordle was first created by software engineer, Josh Wardle, for his partner who loved word games. After it became a hit with his family members, Wardle decided to go public with the game and published the website in October 2021.

In the span of just two months, more than 300,000 people began to play the addictive word game on a daily basis. Wordle has recently piqued a particular interest in high school students. At CHS, students can be seen playing the game in between classes and comparing each other’s attempts at guessing the word.

So what exactly is Wordle and what makes it so addicting? Wordle can be found by simply looking up Wordle on Google or going to https://www.powerlanguage.co.uk/wordle/ . When you first open the website, the rules are as follows:

Guess the WORDLE in 6 tries. Each guess must be a valid 5 letter word. Hit the enter button to submit. After each guess, the color of the tiles will change to show how close your guess was to the word.

Wordle also keeps track of the number of days that you have been playing along with organizing how many tries it takes each day to get the Wordle. For the most part, Wordle is a simple game played strategically. I’m new to playing Wordle however, along with my friends and family, I have quickly become obsessed. Here are my top three tips to fulfilling the Wordle of the day:

Start out with a word that has a lot of vowels. Isolating which vowels are used in the word is helpful; it’s easier to identify consonants rather than vowels. Some recommended words include adieu, pious or about.
If you get green tiles in your first or second try, I would try not to use the same letters so you have more of a chance to eliminate other letter possibilities. If you continue to use letters that you already know are in the right spot and in the word, you limit your ability to guess other possible letters.
Try and identify different patterns using the letters you already have. For instance, if there is a c as the second to last letter, you know that most likely will be a k or an h. Patterns like these not only help you solve the word but it’s also interesting to realize how many word patterns we really have become used to and recognize.

I encourage those who have not tried out Wordle to give it a chance, especially now. As of February 1st, the New York Times Company has purchased Wordle from Mr. Wardle, and say the “game will initially remain free to new and existing players.”

Play Wordle for free while you still can, and I bet it will become an essential part of your daily routine.